Jobs, Taxes, and Cost of Living

Perhaps most concerning are the businesses leaving California.  Names such as Nestle, Chevron, Toyota, and Nissan are collectively relocating thousands of jobs to other states.  Others such as Carl’s Jr, a California fixture for nearly 6 decades, have closed their CA headquarters entirely.

Traffic and congestion likely find their way into a California dinner table discussion weekly; however, it is the incredible cost of living likely spurring many to leave.  Bubble-ish home prices, astronomical rents, regulation-inflated gasoline prices, high water and energy costs, all act as financial headwinds.

CA’s economy has expanded significantly since the crisis; however, many feel wage gains have not kept up with increases in cost of living.  This imbalance is pushing some people out of areas they’ve called home for decades.

In 2015 our team projected this migration out of CA would pick up steam as home values and rents increased.  Thus we began securing licenses in the states most likely to benefit.  Based on national data and our client interactions, here are the three top states attracting Californians:

Texas:  no state income tax,  some of the most business-friendly regulations in the country, milder weather, and urban centers which possess significant opportunities.  It’s no wonder why Texas is luring disenfranchised Californians.

Arizona: low state income tax rates, very low property tax rates, lower cost of living, warm weather, and proximity as a border state.  It was easy to predict Californians would be intrigued by a move to the desert

Oregon: no state sales tax, breathtaking coastlines and terrain, mild weather, endless outdoor activities, and proximity.  It’s no surprise Oregon has become a natural draw for Californians, particularly those from highly congested and costly spots such as the Bay Area.

Assuredly these are not the only states attracting Californians; states such as Washington, Nevada, Idaho, Montana, and Colorado all present enticing benefits.  Texas, Arizona, and Oregon simply appear to be the best positioned and data indicates they are benefiting most thus far.

Below is an image of our current service map (click the map to see the live version).  This provides a rather accurate depiction of the California migration as seen from our client base of 30 years: 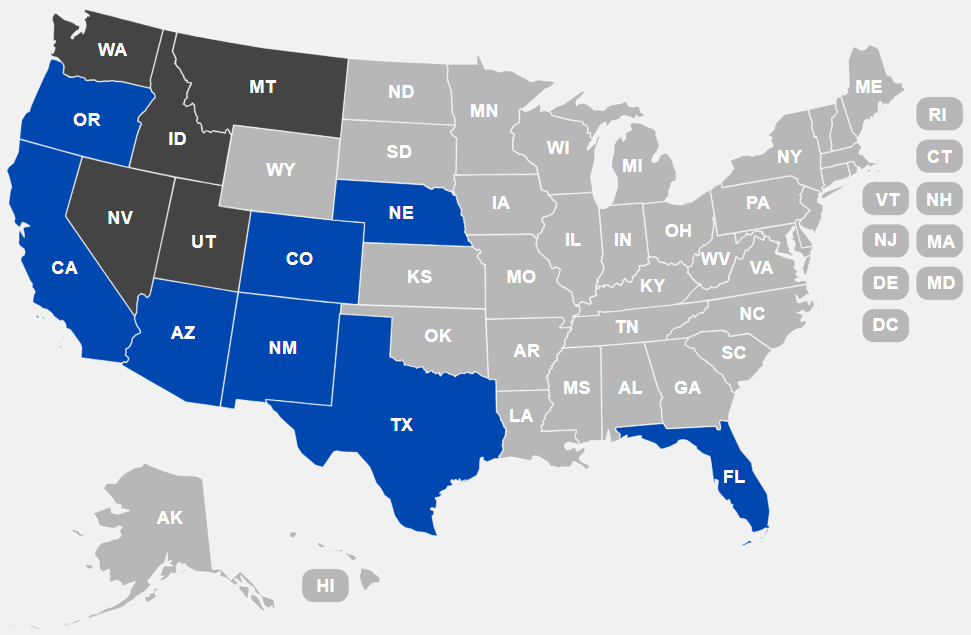 Are you contemplating retiring, investing, or buying a second home in any of these states above?

We work for you, not the bank.

Getting the right mortgage is easy when you shop and compare with unbiased guidance from your mortgage advisor.

Not available in all states